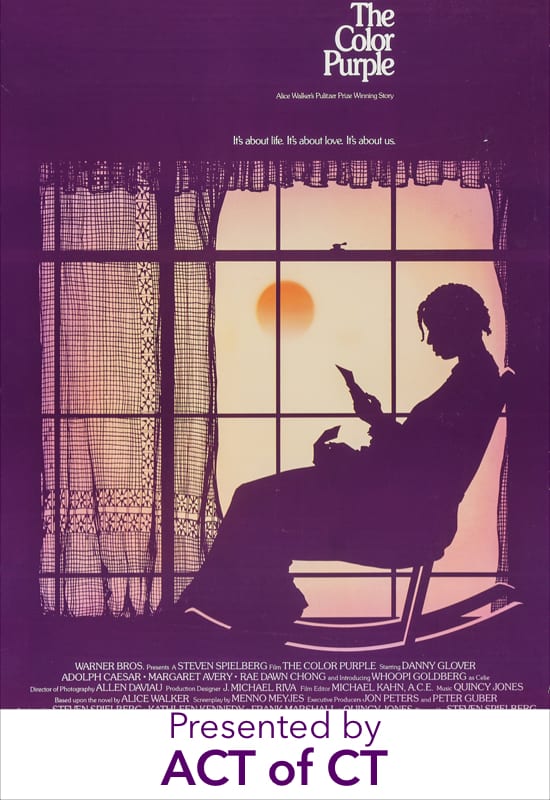 PRESENTED IN COOPERATION WITH ACT of CT

In addition to being shown after the film in the theater, our bonus content, sponsored by People’s United Bank, will also be available on our YouTube channel for anyone to watch from home. The bonus content for The Color Purple will consist of an interview with actress LaChanze led by entertainment reporter Cheryl Washington and can be seen following the screening in the theater or online after the screening date. LaChanze is best known for her roles on Broadway as Celie in The Color Purple (2006 Tony Award for Best Actress in a Musical) and Ti Moune in Once on This Island.

Based on the Pulitzer Prize-winning novel by Alice Walker, The Color Purple spans the years 1909 to 1949, relating the life of Celie (Whoopi Goldberg), a Southern black woman virtually sold into a life of servitude to her brutal husband, sharecropper Albert (Danny Glover). Celie pours out her innermost thoughts in letter form to her sister Nettie (Akousa Busia), but Albert has been hiding the letters Nettie writes back, allowing Celie to assume that Nettie is dead. Finally, Celie finds a champion in the don’t-take-no-guff Sofia (Oprah Winfrey), the wife of Albert’s son from a previous marriage. Alas, Sofia is “humbled” when she is beaten into submission by angry whites. Later, Celie is able to forge a strong friendship with Albert’s mistress Shug (Margaret Avery). Emboldened by this, Celie begins rifling through her husband’s belongings and finds Nettie’s letters. Able at last to stand up to her husband, Celie leaves him to search for a new life on her own. Directed by Steven Spielberg, The Color Purple was nominated for eleven Oscars. The film was co-produced by Quincy Jones, who also wrote the score.