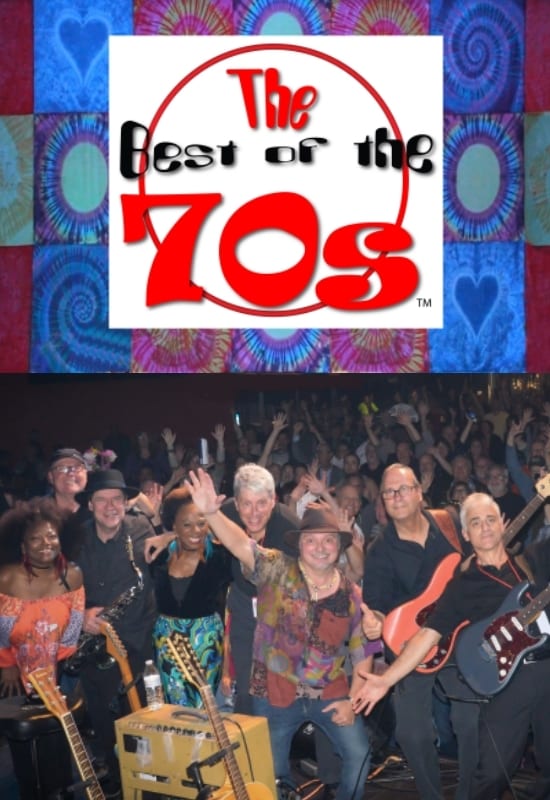 The Best of the 70s is a Celebration of the Greatest Music of All Time.

70s fans of all ages will be singing along to songs like; “Margaritaville”, “You Can’t Always Get What You Want”, “Let It Be”, Rambling Man”, “Teach Your Children”, “Feelin Alright”, “Country Roads”, “Comfortably Numb” and “American Pie.”
“The Best of the 70s” features a great band DizzyFish led by Eric Herbst with Backup Singers Angela Clemmons and Sharon Jerry-Collins. Eric & DizzyFish have rocked audiences opening for Steve Miller, Three Dog Night, Marshall Tucker and many others. Eric as well as being a powerful live performer has written and produced original songs recorded by musical legends B.B. King and Johnny Cash.

Angela has had a 35-year career singing and performing with some of the biggest names in music such as Aretha Franklin, Elton John, Michael Jackson, Steely Dan, and many others. She is also the director of both Shoreline Soul and Valley Soul Choirs.

​Sharon’s musical journey has taken her around the world, touring, recording, and performing with such artists as Billy Preston, Whitney Houston, Roberta Flack, Bette Midler, and many others. Sharon has also appeared on Saturday Night Live.

The reviews are in and 70s fans love this show! Roger Daltrey (of The Who) told Eric “Hey man, you do Dead Flowers better than the Stones.” If you love 70’s music don’t miss this very special concert.

THIS EVENT IS A RENTAL OF OUR FACILITY- MEMBER EXCHANGES ARE NOT AVAILABLE.