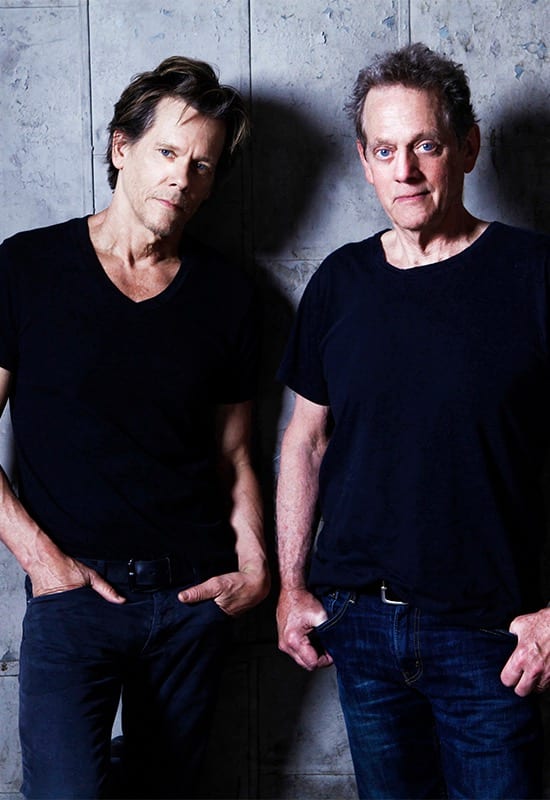 PLEASE NOTE:
THE BACON BROTHERS originally scheduled for Friday, September 25 – is being postponed to a new date to be determined. Please hold onto your tickets until a new date is scheduled, or you may exchange them to an upcoming show. Please call the box office at 203-438-5795 if you have any questions. The box office is open Monday – Friday 9:00am – 5:00pm.
Cut Loose for a great night of music when the Bacon Brothers return to The Playhouse! Actor Kevin Bacon and brother Michael have been writing, recording and performing together for more than two decades. The duo has released seven albums and earned praise for their gritty, eclectic live shows!  Long before Kevin Bacon launched his prolific stage and screen career, and before Michael Bacon became known as the go-to composer for film and television, they were just two brothers, born nine years apart, coming of age in Center City Philadelphia.

By the late 1960s, Michael, already a professional musician, would gig with his band at the city’s famed Electric Factory with a young Kevin tagging along when he could.  Neither brother lacks the means to steal the spotlight. Kevin Bacon is an award-winning actor with 80 films and dozens of television and stage credits to his name, resulting in numerous Emmy and Screen Actor’s Guild nominations cited in his resume. Older brother Michael, an Emmy-winning composer, most recently scored the documentary “That Way Madness Lies.” Other recent works include the audiobook: “You Don’t Look Your Age…And Other Fairytales” and the HBO documentary “Underfire: The Untold Story of Private First Class Tony Vaccaro.”

The Bacon Brothers recently released their newest single, “She-Zee-Zee (Easy On My Eyes)” and accompanying video. The track was written by Kevin Bacon and produced by The Bacon Brothers. The video featuring Kyra Sedgwick, was directed by Kevin.