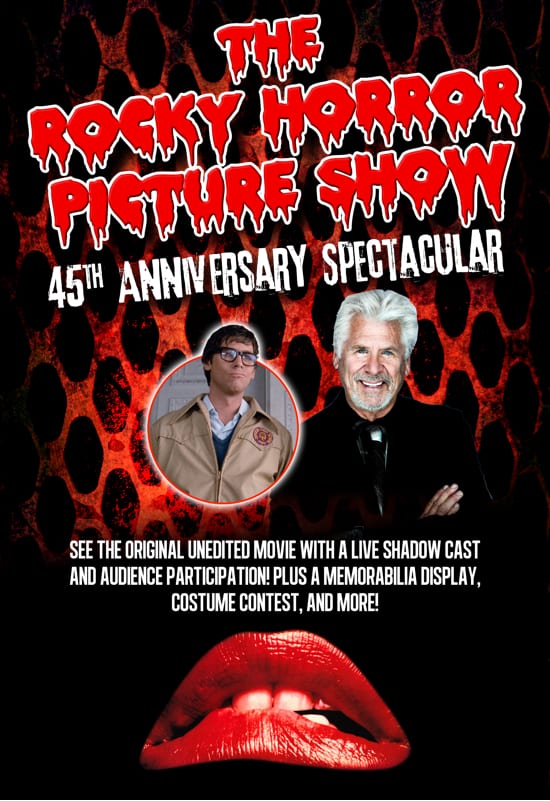 Let’s do the time warp againnnnnn!

See the original, unedited movie along with a SHADOW CAST – a full cast of live actors performing on stage, in front of the screen! This event also includes a costume contest, audience participation, memorabilia display and much more!  It’s the event that will have you shivering with antici….pation. Celebrate the 45th Anniversary of The Rocky Horror Picture Show with the one-and-only “Brad Majors” himself, Barry Bostwick. Be a part of this party celebrating more than 4 decades of the phenomenon that has sparked fans to dress up and shout lines in movie theaters across the world. Put your hands on your hips for the “Time Warp” and sing your loudest Hot Patootie as you enjoy a screening of the film with all your favorite creatures of the night. Following the film, Barry Bostwick (“Brad Majors”) will dish on all his best behind-the-scenes stories, working with Tim Curry and Susan Sarandon and so much more. Brad! Janet! Dr. Scott! Rocky! Whichever character you decide to be, make it your best costume and enter the fun contest. Give yourself over to absolute pleasure with The 45th Anniversary Of The Rocky Horror Picture Show with Barry Bostwick: Film Screening Party, Costume Contest, Audience Partici-Pation Plus Live Talkback And Q&A With Barry!