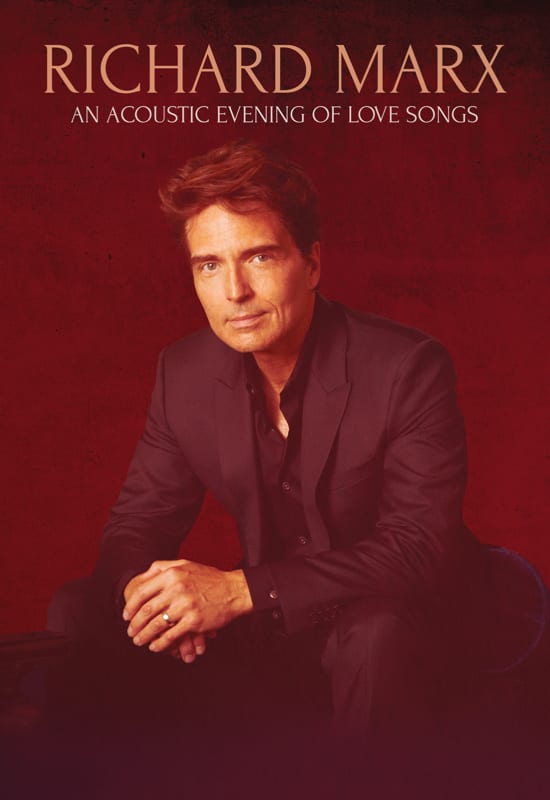 Join us in the lobby before the show for a complimentary tasting of Freixenet Prosecco, ICE, and Italian Rosé

Richard Marx returns with an intimate acoustic set of his love song hits – “Right Here Waiting for You,” “Endless Summer Nights,” “Hold On to the Nights,” “Now & Forever,” “Straight from My Heart” and more!

As a performer, songwriter and producer, Richard Marx’s nearly three-decade-long career has had innumerable of highlights. The Chicago native has sold more than 30 million albums worldwide, starting with his self-titled debut which went to #8 and spawned four Top 5 singles, including the chart-topping “Hold On to the Nights,” with “Don’t Mean Nothing” earning him a Grammy nomination for Best Male Rock Vocal Performance. Marx’s forthcoming album, Limitless,  (to be released on February 7) is his first album of original songs in six years, as well as his first new release for BMG. Produced in part by Marx and featuring co-writes with Sara Bareilles, Richard’s son Lucas Marx and his wife Daisy Fuentes, Limitless represents a new beginning for the celebrated singer-songwriter. While his last album Beautiful Goodbye closed the book on one chapter of his life, Limitless opens a new one. After falling back in love, remarrying and settling into a new home in LA, “I’ve never felt so intrinsically strong and optimistic about my future,” Marx says, and the bright, heartfelt pop of Limitless reflects that feeling.