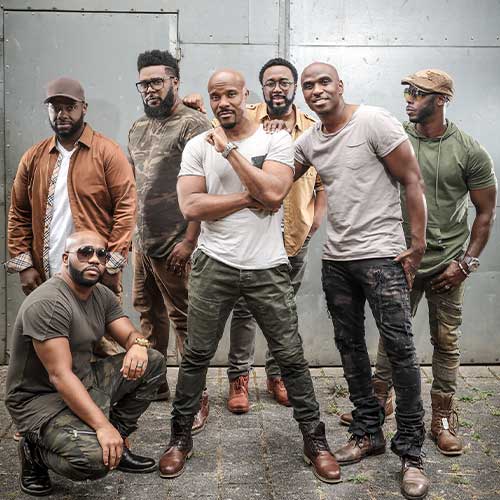 Using just the human voice, Naturally 7 summon up soul, rap, rock and folk in one harmonious balance. After appearing on CBS’ “World’s Best” this season, they return to The Playhouse with their 20th anniversary tour!

7 guys. Multiple ways of making music using only their voices. What they do is far more than a cappella. They are a band without a band. Having met in school and gospel choir they quickly discovered that they were doing more than just singing songs, they all discovered perfect hypervocal capabilities. That’s why Naturally 7 call their music “vocal play.”  They have famous fans such as Michael Bublé (whom they joined on 3 world tours), Coldplay (“Fix You” is one of the finest adaptions of music you can imagine), Quincy Jones (who called them “best a-cappella band worldwide”), Herbie Hancock (listen to their H. Hancock medley) and many others. Their repertoire is a mix of their own compositions and cover versions.

The Rolling Tones are a 16 member all male a cappella group from John Jay High School in Cross River, New York. They are a continuously evolving group made up of freshman through seniors. This past year they won 2nd place at the GILDAS Club Annual A Cappella Competition. The group covers everything from Santana to The Backstreet Boys.