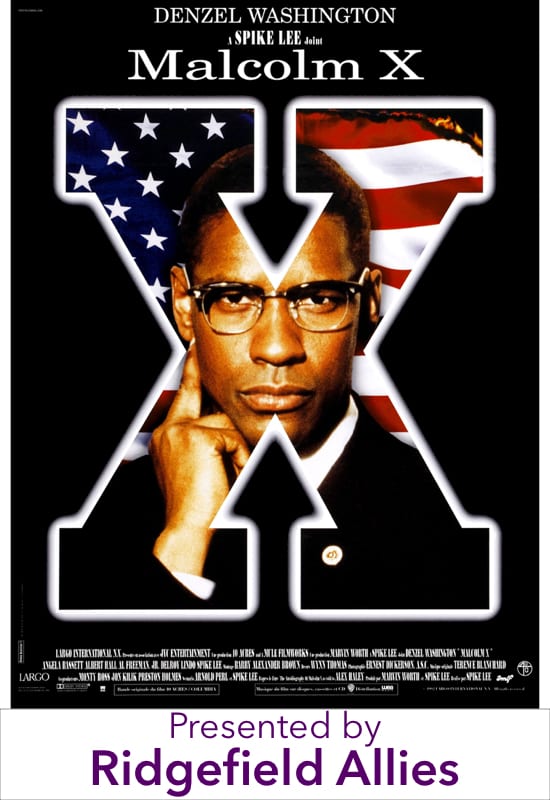 PRESENTED IN COOPERATION WITH RIDGEFIELD ALLIES

In addition to being shown after the film in the theater, our bonus content, sponsored by People’s United Bank, will also be available on our YouTube channel for anyone to watch from home.  The bonus content for Malcolm X will consist of an interview with actors Giancarlo Esposito and Sharon Washington, who portray Thomas Hayer and Augusta in the film. Entertainment reporter Cheryl Washington will talk to the award winning actors about their roles in the film and the impact that film has had and how it translates into what we are seeing in society today.

Anchored by a powerful performance from Denzel Washington, Spike Lee’s biopic of the controversial black activist and leader of the struggle for black liberation, Malcolm X, is heavily inspired by Alex Haley’s The Autobiography of Malcolm X. The film begins with Malcolm Little as a petty criminal. He’s sent to prison for burglary, but his incarceration proves to be a blessing in disguise, as he’s exposed to the teachings of Islam and learns discipline. Upon his release from prison, he adopts the last name “X” and rises within the Nation of Islam, but his ascent is met with resentment and opposition, especially when he and mentor Elijah Muhammad begin to feud. Suspended by the Nation, he makes his pilgrimage to Mecca, where he learns that there is good in all races. Upon his return to the United States, he denounces racism and becomes open to working with the civil rights leaders he had previously shunned. The film follows X up until his assassination at Harlem’s Audobon Ballroom in 1965.