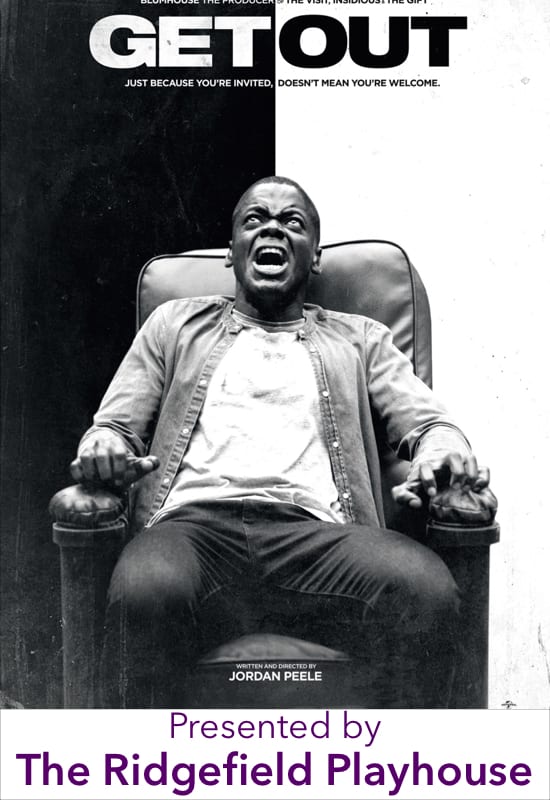 PRESENTED IN COOPERATION WITH THE RIDGEFIELD PLAYHOUSE

In addition to being shown after the film in the theater, our bonus content, sponsored by People’s United Bank, will also be available on our YouTube channel for anyone to watch from home. The bonus content for Get Out will consist of an interview with Anthony Breznican, novelist & correspondent for Vanity Fair, and Chancellor Agard, staff writer for Entertainment Weekly, led by entertainment reporter Cheryl Washington.

Get Out was recognized as one of the top 10 films of 2017 by the National Board of Review and the American Film Institute. Get Out received 39 major nominations in 2018, winning 17 awards including an Academy Award for Best Original Screenplay by writer and director Jordan Peele.  Now that Chris Washington (Daniel Kaluuya) and his girlfriend, Rose Armitage (Allison Williams), have reached the meet-the-parents milestone of dating, she invites him for a weekend getaway upstate with Missy and Dean. At first, Chris reads the family’s overly accommodating behavior as nervous attempts to deal with their daughter’s interracial relationship, but as the weekend progresses, a series of increasingly disturbing discoveries lead him to a truth that he could have never imagined.