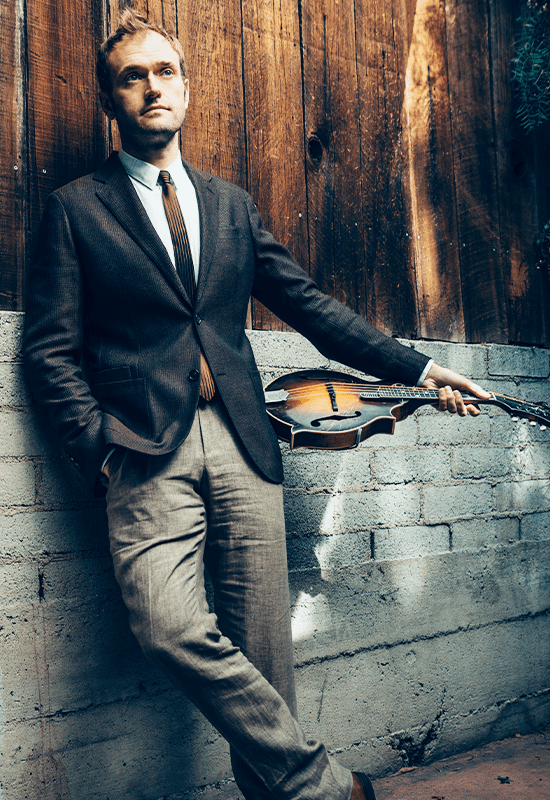 Outdoors - seated under The Playhouse tent

With four Grammy Awards and 22 nominations, internationally renowned mandolin virtuoso, composer and vocalist Chris Thile has been wowing audiences for nearly 20 years. As a MacArthur Fellow, a member of Goat Rodeo, Punch Brothers, Nickel Creek, and the host of the radio program, Live from Here, Thile’s broad outlook encompasses classical, rock, jazz, and bluegrass. His music transcends the borders of conventionally circumscribed genres, and created a distinctly American canon and a new musical aesthetic for performers and audiences alike.

A child prodigy, Thile first rose to fame as a member of Grammy Award-winning trio Nickel Creek, with whom he released four albums and sold over two million records. In 2014, along with a national tour, the trio released a new album, A Dotted Line, their first since 2005.

As a soloist, Thile has released several albums including his most recent, Thanks for Listening, a collection of recordings, produced by Thomas Bartlett, originally written as Songs of the Week for A Prairie Home Companion. In February 2013, Thile won a Grammy for his work on The Goat Rodeo Sessions, collaborating with Yo-Yo Ma, Edgar Meyer, and Stuart Duncan. In September 2014, Thile and Meyer released their latest album collaboration, Bass + Mandolin, which won the Grammy for Best Contemporary Instrumental Album. Punch Brothers released their latest album, The Phosphorescent Blues, in January 2015, and a follow up EP, The Wireless, in November of the same year. Most recently, Thile released a double-album with Brad Mehldau, titled Chris Thile & Brad Mehldau, in January 2017 and a collection of works from Bach with Yo-Yo Ma & Edgar Meyer in April 2017 called Bach Trios. Continuing his trend of creative excellence, Thile took home the Grammy for the Best Folk Album for the Punch Brother’s 2019 album, All Ashore.