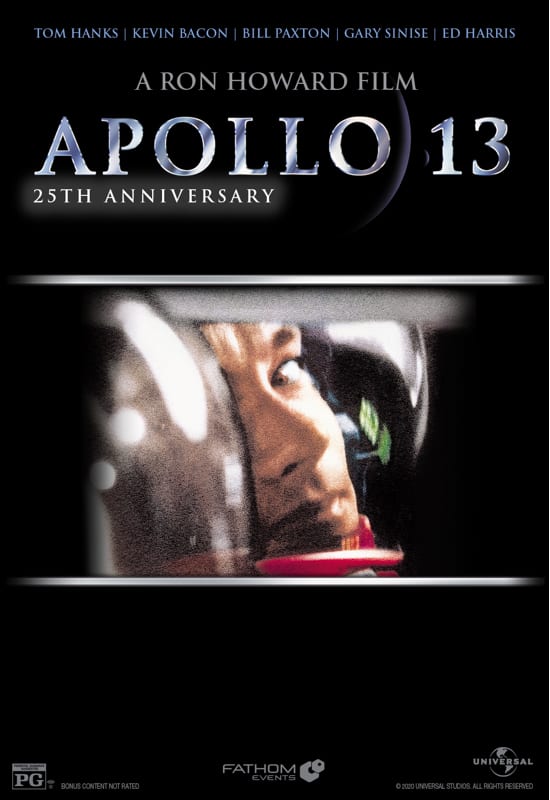 It’s been 50 years since the Apollo 13 mission, and 25 years since the premiere of the stunning dramatic rendition that brought the historic flight and its crew to life for a new generation. Nominated for nine Academy Awards®, including Best Picture, the real-life space flight that gripped the nation and changed the world is returning to theaters for a special in theater event in honor of the anniversary of both the movie and the mission.

It had been less than a year since man first walked on the moon, but as far as the American public was concerned, Apollo 13 was just another “routine” space flight – until these infamous words pierced the immense void of space: “Houston, we have a problem.” Produced by Brian Grazer and directed by Ron Howard, Apollo 13 stars Tom Hanks, Kevin Bacon, Bill Paxton, Gary Sinise and Ed Harris in NASA’s epic operation to save the lives of 3 astronauts battling to survive an ill-fated mission to the moon.

Join your friends and family, young and old for an Apollo 13 experience that only the big screen can deliver!

Keep it “contactless” and save money! Tickets purchased online are only $10! Please purchase your tickets online and you’ll save $2!
Purchase concession via our mobile site ridgefieldplayhouse.ordernext.com. Available up to two hours prior to the start of the movie- you can pick up your concessions on your way in! The app will be open throughout the film as well.
Ushers will seat you – All tickets are General Admission.
Hand sanitizer will be available throughout the lobby and bathrooms.
And remember: FACEMASKS ARE REQUIRED AT ALL TIMES! Please maintain a 6 foot distance from others.